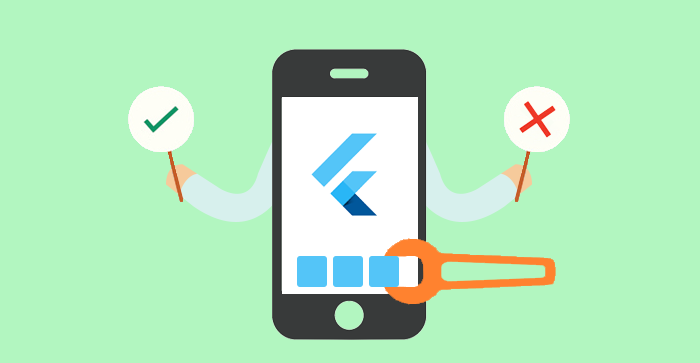 From the initial release date (May 2017), Flutter Apps are buzzing around the developer world. The interesting part is, not many people appreciate Google’s SDK (Software Development Kit), but this word “Flutter” is in every mobile app developer’s mind. So, let’s first clear it out that what is so special about Flutter Apps?

Flutter is an only mobile development SDK which gives reactive views without the need of JavaScript Bridge: This fact makes it more try worthy and exciting.

·         UI elements of Flutter work according to some specific guidelines.

·         React native is the top competitor of Flutter app development.

·         Flutter is a Dart (object-oriented programming language) based SDK

Now that we have learned some basic facts describing Flutter, let’s go further and discuss its advantages and disadvantages-

Flutter allows writing one code to use on whichever platform you want. Have one Codebase and use it on different Operating systems. Did I mention that Flutter can work on Fuchsia (A Google developed experimental operating system)? According to some people, Fuchsia can replace Android in the future.

Mobile Apps which are made with Flutter are a lot faster than the apps made with other SDKs. Besides, Flutter’s better UI promises smoother user experience without hanging and breaks while scrolling.

Flutter works wonders with MVP and MVP plays a paramount role for the foundation of mobile application. So, if you want your app to be developed quicker, go for Flutter.

You can call Hot Reload an upper hand for Flutter because it allows the developer to notice all the minor and major changes in the code right away. Not only the developer can see them, but can also do little fixes with the help of Hot Reload.

Flutter produces a single code that can work with multiple platforms such as Android and iOS. So, the programmers don’t need to write two codes and test them individually on Android and iOS, hence, minimised testing efforts.

Working on Flutter is so easy that developers can work with some very low-end devices too where they can access the native features like camera and geolocation. Flutter also lets you reuse your existing code of Java, Swift and Objective-C for iOS and Android development.

Yes, I agree that developers are accepting Flutter with open hands, but still, there is a long way to go. Large groups of developers still don’t find Flutter comfortable enough to replace other SDKs. In the terms of user support, Flutter is lacking behind.

Continuous integration support can be called a major disadvantage for Flutter. Because flutter is new and on its early stages, many CI platforms do not support it. It’s a major through back for team Flutter.

Web apps have become equally crucial as mobile apps for businesses and no company can ignore them. Unfortunately, Flutter works for mobile applications only. This is a big disadvantage of Flutter.

Flutter may lose some points in this war of pros and cons, but its advantages are way heavier than disadvantages. Change is the only constant in the technology world and if the change has some benefits, why not give it a try?

Why Vulkan APIs will redefine the apps in the future

Bonk Be Live, Best In Class Social Streaming App That We Have Seen So Far! For Both iOS And Android

Drones with Camera: A Phenomenal

Top Predictions of Big Data in 2017 and Beyond

Network Marketing Business Review: What Is It and How Does It Work?

Backpack, Sling or Stroller? How to Choose What’s Best for You

Secrets of Attractive and Successful Advertising

Getting Started With Stock Investments While a Busy Parent

Some of the Key Refrigerator Parts to Be Aware of

7 Things to Do to Startup Home-Based Children Day Care

What are international franchise opportunities?

Why Do You Need to Put Workforce Productivity on Your Business Agenda?