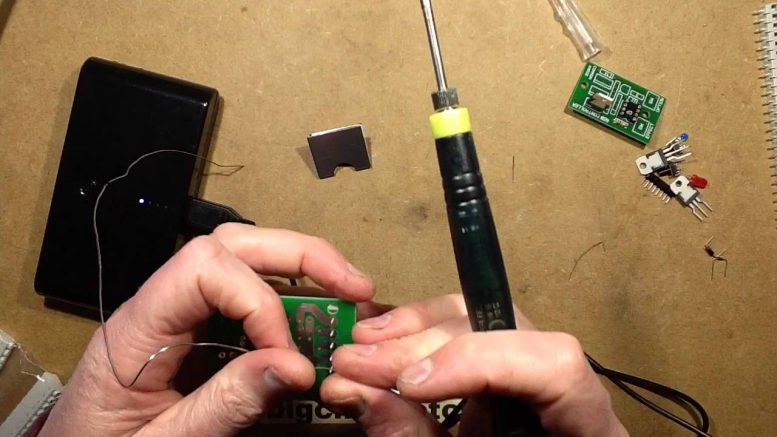 To improve the convenience of soldering, many soldering irons which could be charged by USB are launched in the market. It’s warmly welcomed by users for its great property.

Here are 5 types of USB soldering irons that are worth buying.

The first typical one I want to mention is e-Design. Its TS80 could stand for it. Being made of the aluminum alloy through CNC, it is compact with a delicate design, which embodies a high-tech as well as stylish image. You may find it quite easy to operate because it has the same size as a pen. Concerning the way of charging, TS80 can be charged by USB Type-C interface and QC3.0 standard input. So you can get your soldering iron charged anytime you need. Besides, with a built-in STM32 chip, the tip temperature could be flexibly controlled. And it has an excellent thermal conductivity for that it has an internal thermal ceramic heating core in it, allowing it to conduct the heat by copper. Therefore, the heat could be transferred to the tip very fast. Aside from that, this fine tip soldering iron is equipped with an OLED screen, which is able to monitor the status of doing the welding job. And what may surprise you is its intelligent modes like the sleep mode and the automatic power-off mode. When it’s not used for a while, it would automatically turn off, which could ensure the security. One more thing that adds to its convenience is the speed to replace the tip because its soldering tip is connected to the controller via a 3.5mm push-in plug.

To sum up, with the fashionable design, security, and convenience, e-Design’s TS80 has made it into this list. 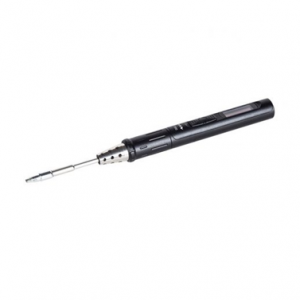 The second one is from iKKEGOL, which is impressive to many people for its simple design. Although it’s like many other soldering irons, it looks neat and fresh. It’s equipped with a USB power connector which is only 5 volts; therefore, it’s not suitable for working with the power adapter. While it offers 8 watts, it’s enough for the general equipment.

This kind of soldering iron also provides many functions for safety. When it’s heated, the LED light would be on. It just needs 15 seconds to heat up to the wanted temperature and would switch off when it’s out of use for 25 seconds. It can reheat as soon as you need. Thus, you don’t have to wait. Only 30 seconds are required before it can touch the object.

Also, it’s durable with a protective cap on it; what’s more, its heating tip, which would wear out for a period of time, could be replaced. In this way, it may have a longer life.

On account of the fact that it has a simple but fresh design, a LED light to give an indication and high speed to reheat, you can use this sort of USB soldering iron almost everywhere in your house.

Part of the attraction of Turnraise’s soldering iron is that you don’t have to deal with a bulky 13amp plug so you can do your job even in a narrow space.

If you use it at home, you could connect it with your laptop without using an adapter. Similar to the type mentioned above, it also has a protective cap which aims to prolong the life. You may be happy to know it’s only 20 grams.

It would turn off if it didn’t touch another item for 25 seconds. Then it can reheat immediately. Heating up within 15 seconds can help save the energy, and cooling down within half a minute contributes to the security. Besides the LED indicator light, it has a long cable as well. So you can use it even in some awkward situations.

Its light weight and other functions for safety make it worthwhile.

It’s of a classical design. What makes it special is that it is light and slim, so it can be adopted in the delicate job with its sharp tip. If you are a hobbyist, that’s your cup of tea.

The power of it is 8 watts, which is more than enough. Within 20 seconds, it could heat up to 480c, which is adequate for an electric project. It would turn off when it’s not used for 25 seconds and reset whenever it’s needed.

The tip is protected by a cap and can be replaced. When heating up, a red LED light would give a signal, and the 150-cm cable is to create convenience. A stand and solder are able to get you started.

The USB soldering iron has the general functions. For example, the cable of it is also 150cm, and it is equipped with a protective cap, a small piece of solder and a LED light as well.

If you allow a child to use this device, you ought to supervise him/her. Because it could quickly warm up. When having not been used it for 15 seconds, it would stop working; and it just takes 30 seconds to completely cool down.

Additionally, it is small, light and portable. With its grip, you can have complete control over it. When in the sleep mode, it would come to life once its tip is touched.

Anyway, it has all the necessary functions of the USB soldering iron.

That’s all about the USB soldering irons recommended here. All you have to do is to get them home!

Be the first to comment on "Can your Soldering Iron be Charged by USB?"

The best technologies for web design

How to Stop Pop-Ups Screens Appearing on Android Devices

Why Ignoring Help Desk Software Will Cost You Time and Sales

Waking up at Just the Right Time: 4 Benefits of Sleep Tracking Apps

10 Reasons Why You Need a Digital Marketing Expert

The Future of Business Automation with Machine Learning Techniques

Here’s an Online Tool for Converting JPG to PDF

How to add a personal touch to your wedding invitations