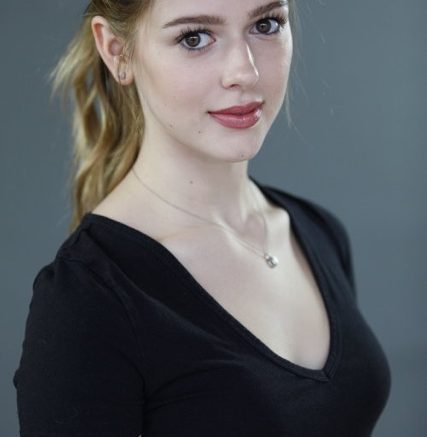 Within every group there is a hierarchy. Actress Jenna Wheeler-Hughes portrayed this very concept to great response in the film Mean Queen. As Sara, she is part of the central characters which includes Zoe McLellan as Julie Taylor, Allie MacDonald as Amy Turner, and Nia Roam as Miya Fowler. While the tale of a new girl in school meeting up with the popular (and mean) group of girls who dominate it is not entirely new, the energy that Jenna brings as the conflicted “mean queen” is fresh. Her performance reminds the audience that pure black and white actions and motivations are not typical in the real world…or the film world when done extremely well.

When Julie Taylor takes over teaching at a new school, she hopes it will be a fresh start for herself and her teenage daughter Miya. Amy Turner, the school’s resident mean girl, quickly takes a shine to Miya and Julie’s intuition about Amy’s motivation seems well founded. This “mean queen” and her closest subjects are duplicitous and single minded in the goal of achieving the Prom Queen title for Turner. High school politics and a suspicious suicide create an air of danger which emanates from that most ferocious of creature, the teenage socialite. Canadian Screen Awards (CA) and Directors Guild of Canada nominee Philippe Gagnon has established a sense of constant danger and shifting loyalties that leaves one wondering if secondary school is as precarious as warfare itself.

For Wheeler-Hughes, playing a less likeable character like Sara is substantially enjoyable. She concedes, “I don’t see Sara as a villain per say, though she is one of the mean girls at school. I admit that playing a mean girl is much more fun than playing a nice one. I believeeveryone has an inner mean girl but I choose not to let mine surface. That’s why I think it’s fun to explore the dark side of my brain when playing a character like this. I get to dive into a different part of my consciousness in a safe environment without ever hurting anyone’s feelings. Everyone has a dark side; as an actor, it’s fun to be able to safely bring it out every once in a while.”

The way in which Jenna communicates her character validates her layered perspective on “meanness.” Sara is kind to Miya when they first meet, and even when they are at a party; it’s not until later when Amy plants the idea of being unkind that her less affable self appears. In a variety of situations, it is Sara’s hesitation that reveals more about her than anything. It’s her belief in popularity by association, within Amy’s sphere of influence, that channels Sara’s pettier actions. Jenna remarks, “I wanted Sara to be as realistic of a ‘mean girl’ as possible.

We didn’t want it to feel like a Disney movie, we wanted it to be believable. That’s why we agreed that Sara would wear as little makeup as possible and be all for making a new friend [Miya] when she is introduced. When Amy decides that Miya should no longer hang out in their clique, Sara decides not to pick this battle and go along with it. Managing a social life in high school is hell; Philippe [Gagnon] and I discussed that Sara would consciously decide not to take Miya’s side because of how much it could affect her status as school. It was not something she was willing to risk.”

Jenna was cast as the slightly less mean girl because Bruno Rosato Casting reached out to her on the strength of her other auditions. While some might find it concerning that a professional casting agency saw us as a great “mean girl”, Jenna professes, “I was so happy I was cast as Sara. For one thing, she is the slightly nicer one. Most importantly, it was a chance to work with a cast that was my age, for the most part. There was a real strong comradery there and it was a positive environment to work in. You might not guess that from the film but that just means we were doing great work.”

Be the first to comment on "Jenna Wheeler-Hughes: The Hesitant Mean Queen"

Interactive Chat Features Can Really Give Your Business A Boost

Keep Your Jeep Clean of Mud and Dirt with Right Treatment

How Long Does the Eviction Process Take in Michigan?

Best Options to Learn the Process of Freelancing

How much can Bwanaz help?

How to Promote Your Fashion-Related Business

TIPS AND TRICKS TO START A RESTAURANT BUSINESS

Why Use Equipment Rentals in the Construction Business

9 Office Desk Essentials for a Cozy and Productive Workspace

Funny Comic Advertising for Your Business