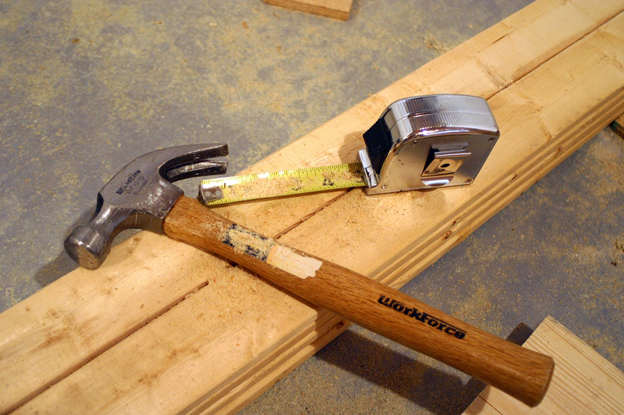 In undergoing a project to building any structure, the first things to put in place are the required tools for the successful completion of the project. It is very unwise to first begin building without an accurate appraisal of the necessary equipment needed.

The measurement tools are an important part of a building. Putting a solid physical structure in place requires a lot of measurement. The accuracy of the measurement depends not only on the instrument but also on the user.

It is worthy of note that for each stage of construction there are different measuring tools required, for instance when it comes to construction or building a house the first step is to survey the land; this requires reconnaissance which sometimes involves pacing (counting the number of steps taken multiplied by the average pace distance for one step) around the land, or measuring the width of the land using Gunther chains, steel tapes, linen tapes, electronic theodolite, electronic distance measuring equipment(EDM), then the angles are measured using theodolites, prismatic compass etc.

Depending on the topography of land being surveyed there might be a need for the land to be leveled, this is done using a leveler, leveling staff, etc. The most recently used are accurate laser levels, and there are different types of these devices available.

The spring return pocket measuring tape usually appear small and would generally fit into the pocket. It is the more common measuring tape and can measure up to 15 feet in length.

The long measuring tape, on the other hand, is bigger. It can vary in size but they generally measure lengths varying from 25 to 500 feet. This is designed mainly for engineers and builders. The lengths and scales of the tapes may vary based on the use it was intended for.

It could come in different materials, for example linen tape, steel tape, each has different peculiarity as to where and under what conditions the tapes could be used i.e. steel tapes isn’t efficient in cold climates and breaks easily if climb over so it is not used in highway measurement, also linen tapes sags easily so it is used for short distances to reduce errors in readings.

It is a primitive instrument used for measuring horizontal distances, it is made up of wire called links, which has a ring at the ends, these links are joined together by the rings.

The Gunther chain is about 66 feet long and each link is 7.92 inches longer. It is no longer in use because of the difficulties it poses when it is entangling.

It is used to measure lengths or distances. The wheel has a measured diameter and it keeps a record of the number of complete revolutions it undergoes from which measurement of the distance covered can be known.

It is a box container used to measure quantities of sand, cement or aggregates used for making concrete. The size of a standard measuring box is 300mm x 300mm x 400m (length x width x depth) and the volume is generally one cubic foot. The measuring box is often filled over the brim with the materials to measure when using it.

It is an L- shaped instrument used to create a perfect right angle at the corner of a masonry wall.

This instrument transmits beams of either visible light or in the form of invisible infrared light that helps in locating a known benchmark or reference elevation point which is a point through which another measurement could be taken from. There are two kinds: the single beam laser which project lines either vertical or horizontally, also the rotating beam laser level; this type projects a horizontal plane that serves as a reference level for other building constructions such as setting out, excavation, checking depths etc.

It is a small device used for measuring the internal and external diameter of pipes, screws, and bolt, this helps the plumber to use the materials specified by the architect and quantity surveyors, so he doesn’t mix up the sizes.

This is a device that measures depth most times in water, it is used in building certain structures in the house such as the septic tank, swimming pool, and other of such structures, it also measures the water pressure.

In using these instruments, it is important to take note of the working conditions for each instrument so as maintain its lifespan, for this reason, precautions, have to be taken some of which is:

Note errors are bound to happen, so it is better to use accurate and precise measuring devices to get precise results.

Free File Sharing: The Top Five Apps You Have Not Heard of Yet

The Only Way To Do Guest Blogging Right

The impact of Virtual Reality (VR) on WordPress websites

Truly free webpages to get your favorite ringtones

What is an RFI: Best Practices for the Subcontractor

How to give your shop a high-street advantage

Tips and Tricks to Manage Your Rubbish

Tech Businesses Have to Care About Employee Safety, Too. Here’s Why