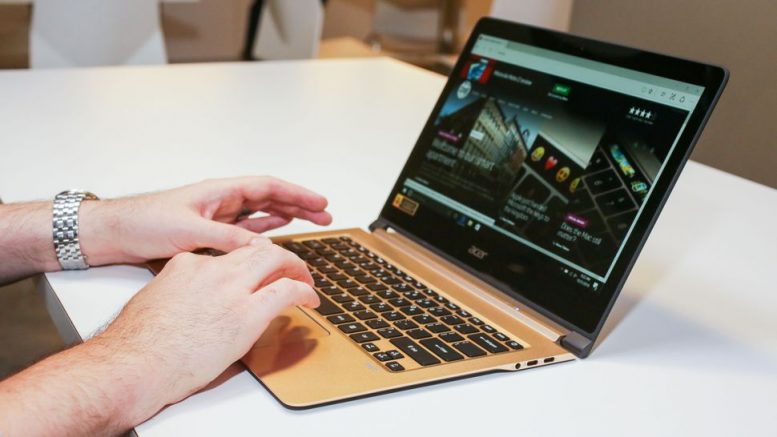 From how it looks like over at the CES event, 2018 has clearly started with a blast. Lots of incredible high-tech gadgets are being unveiled and suffice it to say, this year’s trend is an exciting one. From smartphones to laptop, everything boasts impressive specs and features. One of the most striking items unveiled at the event is undoubtedly the Acer Swift 7.

Almost every single laptop manufacturer in the industry plays the ball in the premium field this year. However, Acer clearly stands out for a myriad of different reasons. The laptop parade is made all the more interesting with this high-end laptop aimed for professionals. The premium Swift 7 will be available for purchase this year at 1,699-dollars a pop.

The first thing that may come to mind the moment you lay your eyes on this masterpiece is its design. The Swift 7 clearly does not disappoint with its elegant look. Made of premium quality materials, its unibody chassis is undoubtedly very well crafted. Its sleek and sophisticated design also gives us the impression that this incredibly thin laptop can be placed in an envelope!

Despite its unbeatable record of being the thinnest laptop in the industry, the Acer Swift 7 is not the lightest. It, without a doubt, feels incredibly light to the touch. But when weighed it’s obvious that the 14-inch laptop packs on the weight compared to its competition. At 2.5-pounds, Acer Swift 7 is undeniably a little bit heavier than the 2.16-pound Lenovo ThinkPad X1 Carbon.

Acer Swift 7 is equipped with a SIM card slot and two USB Type-C ports. Many may question Acer’s move in featuring Type-C ports as opposed to Thunderbolt 3 ports. However, it does not make any difference in its performance whatsoever. The display will be discussed more in the following section. However, the addition of Corning Gorilla Glass makes it all the more attractive and sturdy.

The thinnest, yet the most capable

Acer may have been popular for bringing thin laptops in the past. The brand has successfully secured the reputation yet again with its latest workhorse. The Swift 7 is indeed the new King when it comes to slim and compact laptops. With thickness measured at less than 0.35 inches, it’s obvious that it’s unbeatable in its class. Yes, the latest model is indeed 0.004-inches thinner than its predecessor!

However, it’s worth noting that its decrease in size does not affect its capabilities. Let’s start with its display. No one can deny just how crisp and vibrant its FullHD display is. In addition, the combination of Acer TrueHarmony and Dolby Audio makes for an unbelievable sound! Performance-wise, Swift 7 is powered with 1.30GHz Intel Core i7 processor and equipped with 8GB memory, 512GB drive capacity, Windows 10, and better yet, wireless speed that is 3-times faster.

How to Recover Your Files from NTFS Drive Using R-Studio

UM Capital Review: A Closer Look at Their High-End Technology

Do not Buy Used iPhone Until You Read This!

Tech and Education—All You Need to Know

5 Ways To Advertise Your Small Business

Online Business Ideas You Can Start on WordPress

What do you know about RepelisPlus? Is this the #1 movie app?

Qualities of the Best Company for End of Tenancy Cleaning

The Ins and Outs of Tax Preparation Services