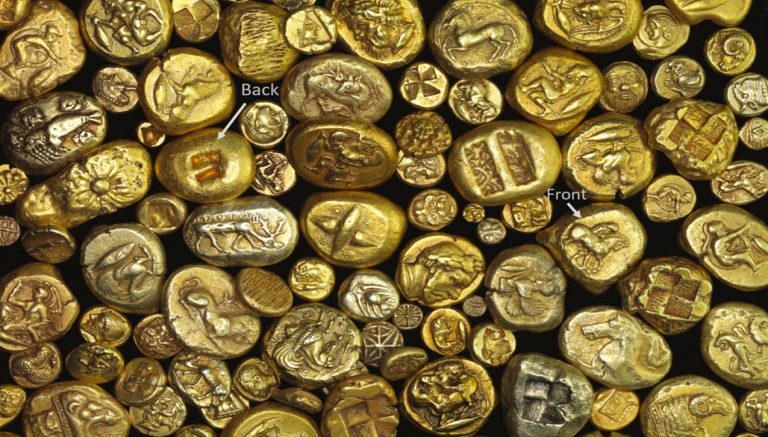 Compared to most modern systems, which might contain five to six different coins, the Lydian system included eight.

The Stater, sometimes called the full Stater, was the highest denomination of coin minted. Like all Lydian coins, their shape was irregular, often bean-shaped, with a consistent weight that equaled roughly 220 grains of wheat, a common weight measurement used in antiquity.

The rest of the coins were uniform fractions of a Stater, by weight. There was the half Stater and the third Stater. Interestingly, the third Stater was the most common denomination of Lydian coin, and the one most frequently found. This coin, called a Trite, is said to have equaled a month’s wages for a common Lydian citizen, which explains its ubiquity.

Additionally, the Lydian system included sixth Staters, twelfth Staters, and coins that represented 1/24, 1/48, and 1/96 of a Stater – the last few were quite small.

Besides the Lydian system’s focus on uniform weights and composition, the Staters distinguished themselves from other proto-coins of the day by their inclusion of a government-backed seal, which guaranteed the value of the coin.

Full Staters featured the head and forepaws of a powerful lion on the left side of the coin, seemingly locked in a struggle with a horned bull on the coin’s right side. The lion was a symbol commonly used by the Lydians, first placed on their coins by King Alyattes. King Croesus, his son, first included the bull motif.

All of the lower denominations were imprinted with the lion image only.

Early Lydian coins were minted in electrum, an alloy containing specific measures of gold and silver. King Croesus instituted a bi-metallic system when he took the reins, replacing electrum with coins minted from pure silver and pure gold.

Occasionally Staters are referred to as “light” or “heavy”. The “heavy” variety were some of the first gold Staters minted under Croesus and were roughly 25% heavier than the lighter staters that were minted further into his reign. The heavier staters tend to be more highly prized than their “light” counterparts.

Coin availability depends on how commonly a given coin was issued and appears in the archaeological record. One third Staters, or Trites, are the coins easiest to purchase.  Full gold Trites minted during Croesus’s reign in near-mint condition sell for approximately $60,000.

If you’re collecting Lydian coins, it’s worth following the offerings from a number of reputable coin dealers as availability and price shifts constantly.

About Rory Brown:
Mr. Rory Brown is a Managing Partner of Nicklaus Brown & Co., the Chairman of Goods & Services, Nearshore Technology Company, and a member of the board of directors of Desano. He is passionate about delving into the history of money and how our modern currency has evolved into what it is today.

Be the first to comment on "Rory Brown, Managing Partner of Nicklaus Brown & Co., Weighs in on the Types of Lydian Coins"

Missed Redmi Y1 Sale AGAIN?? Check the Best Alternatives that are No Less!

Getting Compliant and Staying Agile

How to Replace a Vacuum Cleaner Filter?

The Most Anticipated PS4 Games of 2017

5 Things to Put in Mind before Purchasing Software

Accounting and SEO Services in Adelaide for Online Business Owners

Be Part of Singapore’s Economic Boom

Sauna Heaters, How to Choose The Best One For You

How to Sell Used Car Parts | Cash for Junk Cars

6 Tips to Use When Selling Your Business

What Is a Tax Consultant and Why Should Hire One