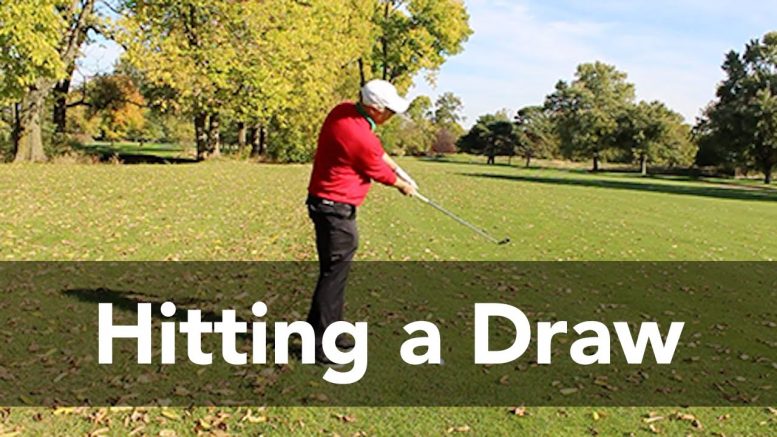 Before we dive into the details of a draw, let us first clear the basics of a draw shot.

A draw shot is a shot that seems close to impossible to perfect but is in fact very much possible with the right guidance. It is a shot which is basically controlled by the movement of the golf ball and the path it takes. It is known as one of the most desirable shots, something so good and still so difficult that none other than professionals can do it. Or so it is believed. 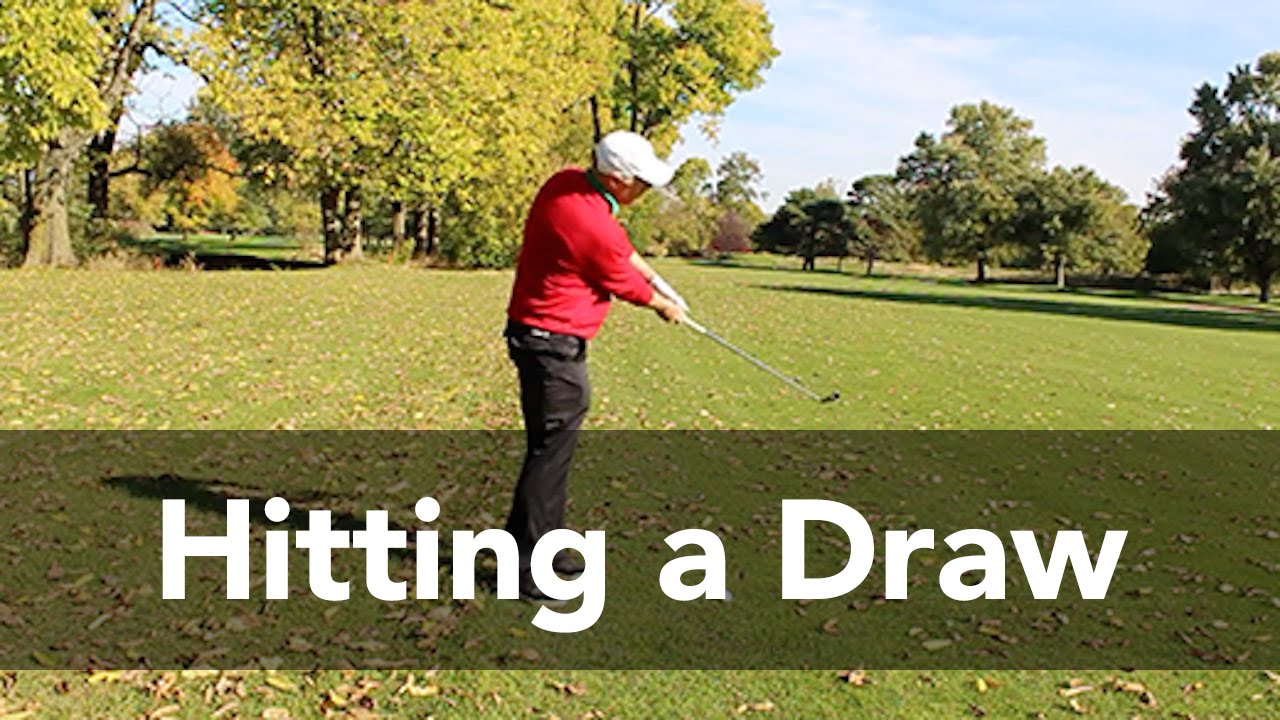 A substantial number of golf players consider this kind of a shot nearly theoretical and unworkable, but in fact, it is the other way around. Many of you would have worked hard for years together trying to learn this shot but probably have failed and so disappointed with the practicality of this one.

But why is a draw shot so desirable?

Yes, it is a fact that professionals are well versed with the technique of creating a perfect draw shot. But mostly they prefer a draw shot because of its consistency. It is the kind of a shot that the player can be sure of. It is a shot that will be controlled by the curve itself. And it will most likely move from right to left as opposed to the opposite direction.

Yet another factor that comes into play is that straight shots are not easy and are in fact very difficult to repeat time and again.

Getting into the technical details, a draw is beneficial because to get a perfect draw the swing must attach the ball from the inside with the club face being partially open to the target and closed to the swing path.

It is because the club face is directed to the right that the ball eventually curves to the middle due to the swing path through the ball that will be more to the right as compared to the club face. As the club enters the impact zone from the inside, the club face will begin to point towards the golf ball well in advance to the actual impact.

However, never doubt your ability or assume that you are not good enough to learn this shot. The point here is that hitting a draw requires some techniques which were previously incorrectly understood. The flaw lies in the basic understanding of how this shot is created.

While you were undergoing training, you perhaps may have been taught to keep the club to the left of the target at impact which is erroneous. Then again there was a mistaken understanding that the path of the club at the time of impact is what determines the direction of the ball in its initial stages.

But with the recent development in technology and gadgets, we now have access to gadgets that can actually keep perfect tracks. We now have what is known as ‘golf radar’. This equipment can provide all the accurate information with records and measurements of any part including a golf swing, ball fight and much more. We now have access to the correct science that goes behind the perfect draw shot.

With the new found information drawing a shot will be not just possible but also easy to achieve.

Let us first get to know the latest developments and revelations with regard to the technique of hitting a draw.

The shift of body may be perfected with rigorous practice but the change that needs to be brought is as follows.

The club’s shaft must be more inclined towards the direction of an impact as compared to its direction at address. Here make sure the clubface is open to a certain extent.

How can one make this change? This is possible if the hips are shifted laterally towards the target during the downswing.

This shift in the forward direction facilitates the path to change from in-to-out along with an open clubface. This, when perfected, is your best bet to hit a draw shot.

It is the lateral shift of hips and you will be able to get a judgment of where and how your weight must be during impact.

While the draw shot may have been thought to have been an extremely difficult shot, it is in fact otherwise. All you need is the right adjustments, accurate calculations, and certain steps and not long before you will be a pro.

Creating a perfect draw shot does not come easily. It requires a lot of practice, occasional failures, and persistence which will help you create that perfect draw that you so wanted.

Tips to get a perfect draw

If you follow the steps mentioned above, you will manage to get your draw shot. There are also some great tips that we have compiled just for you. Ensure you keep a note of these as well that will aid your perfect draw.

Get a firm grip

When you hold the club with your hands, on an average the thumb wound around the shaft of the club with the index finger make something akin to a ‘V’ shape. To make your grip tighter and more string you must try and change that ‘V’ shape into something that looks closer to a right angle.

Even when you take instructions, you will hear of your instructor calling that grip as a strong one. When you have a grip this strong, it tends to facilitate to turn from the right to the left direction. You will need to do a trial and error to figure out just how much you need to rotate your hands to execute the perfect gentle draw. You must take care to avoid causing a ‘snap hook’ as this will go too far off the target towards the left.

When you are about to address you must watch out for the feet as well the shoulders in the right direction of the intended target. You then aim the clubface directly at the target, you can call this position as a club face that has a closed position. A perfect draw would mean the ball to begin from the right and turn and land only on the left such that it ends up exactly at the target.

There are some golfers who find it more practical if the right shoulder is made to drop a little bit at address. This helps them create a shoulder angle that has an upward tilt and thus making it an easier way to create a draw.

A rounded swing is a better choice

While attempting to create a draw, you must imagine a line from the shoulders as well as the feet and check where they are pointing with respect to the address. The club moves inside the imaginary line that has been created. When you attempt to come towards the ball from the position that is inwards tilted, it will help to promote the right to left ball flight. At this point, you must avoid picking the club but instead extend it towards the lower end on the back. You can consider your swing using the driver to have rounded finish or at least less angular. This is better than a shot attempted with your irons.

Imagine the shot before you attempt.

This concept has been well written about. Before you attempt a shot, you must imagine the upper edge of the club moving and outdoing the heel right through the zone of the impact. This moves ahead as follow through continues as before. This is basically the minuscule closed club head position that a person needs to create a perfect draw shot.

When you attempt to hit a draw, the time when you get close to the impact, your left forearm tends to rotate or rolls inwards. With this rotation movement the club face tends to close, this helps to create the path of the ball along its flight in the desired right to the left flight path.

A practical solution to ensure the grip and forearm roll is perfect is to wear a wrist watch. But you must wear the watch with its head turned inside on the left wrist. So if your left arm is turned perfectly the face of the watch will be clearly visible on the follow through.

One needs to take care of other factors like the grip is excessively firm. The need of the hour is to get your hands to loosen up through the ball. If the grip is too tight or if the release is not smooth then the ball might begin moving in the right direction and continue going to the right instead of turning to the left.

Drawing a shot in case of advanced players

If you have spent considerable time on the golf course and have long progressed from being an amateur, you must then move ahead to the slightly advanced form of hitting a draw shot. You would have seen the easier one in which you have to alter your alignment as well as the direction of the club face which is pointing towards the address.

But in the advanced style to hit a perfect draw you need not do any of these maneuvers. The simple adjustment you make is that your feet, knees hips, as well as your shoulders, must all point directly at the target. The club face must also face the target and not be aligned in any direction.

All you have to do is take a normal backswing right to the top. The difference here is to make a deliberate drop of the club slightly on the inside path at the time of the downswing. It must ideally give you feel of the club traveling on a path in a direction right of the target.

The next step is to aggressively rotate your hands all along the impact. This is to ensure the clubface remains closed through the impact. The feeling that usually comes along with this is as if you are throwing your club out to the right of the target.

This style may not work out for those who are still new to the game. But one factor that remains constant is practice. This is your only way to progress in the games.

How to fix your Wi-Fi connectivity issues?

Understanding How a Server Works and What It Is

Art & The Soil Of Silence

Why It Pays To Have A Car Battery Charger During Winter

2017 Advancements of the VR Technology

IT Staff Augmentation Vs. Delivery Teams: Pros and Cons

The Benefits Offered by Gas Fireplaces

How to choose the right car shipping company

Top Reasons Why You Should Go For Salesforce Marketing Cloud!

Tips to Avoid Boringness when Being a Writer

Your 2020 Guide to Case Interview Frameworks