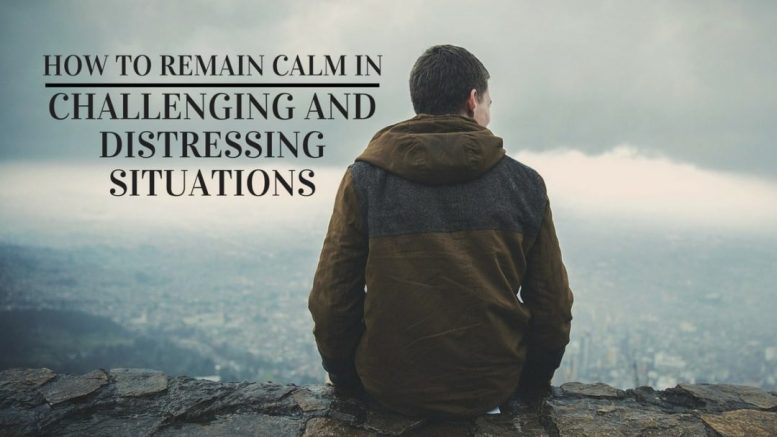 Remaining calm in a stressful situation isn’t something that comes easily for everyone.  When the pressure starts to build, and you’re faced with having to remain calm, it can be hard to muster up the energy to make it happen.

Often your first instinct is to escape the situation altogether and avoid conflict or unpleasant circumstances.  However, it’s crucial to remain centered and focus on handling the situation so that it gets resolved.

Rather than letting your emotions take over, it’s essential to keep your cool and be logical by taking the following action.

Focus On The Facts

It can be easy to start feeling opinions or developing interpretations of what the situation in front of you is.  If you’ve crashed your car, you may feel angry at the other driver which can cloud your judgment.  If your boss criticizes your work, you may start to feel like you’ve been mistreated which can affect your performance.

Rather than making assumptions about the intentions behind the situation at hand and feeling threatened, try to look at the facts.  By focusing on the black and white of a situation rather than reading between the lines, you’ll be able to make smarter moves.

Take Action Towards a Solution

A lot of people make the mistake of panicking when things start going wrong.  They spend their energy spinning their wheels thinking about the problem rather than focusing on a solution.

Use your energy to take action on a resolution rather than only investing your thoughts in the problem.  As a result, you’ll make much more progress and feel much better overall.

When you start to feel your emotions running high, deep breathing can have a massive effect on calming yourself down.  Try to take a moment to step away from the situation mentally and focus on your breath.

Taking three deep breaths before speaking or acting can help center yourself.  When you act out in a state of panic rather than from a state of inner peace, you may be more likely to regret your actions later on.

Don’t be afraid to ask for help if you’re faced with difficulty.  Often one of the biggest reasons for stress is because you feel like the situation at hand is too much for one person to take on.

Reaching out to friends and family in times of need can prove that you have more support than you realize.

Focus On The Positive

Try to focus on what’s going right rather than what’s going wrong even though it may be difficult.  Even though the world may feel like it’s on your shoulders, there is always a silver lining if you look hard enough.

Most important communication standards in the IoT

Keep Your Jeep Clean of Mud and Dirt with Right Treatment

How Big Data is Transforming Marketing as We Know It

How to Unlock Your ZTE Axon M

The Impact of Small Business to the US Economy

Tips for organizing an event

What are Cherry Pickers?

Why You Should Invest in Gold Bars?

How to Find an Affordable Cross Country Moving Company