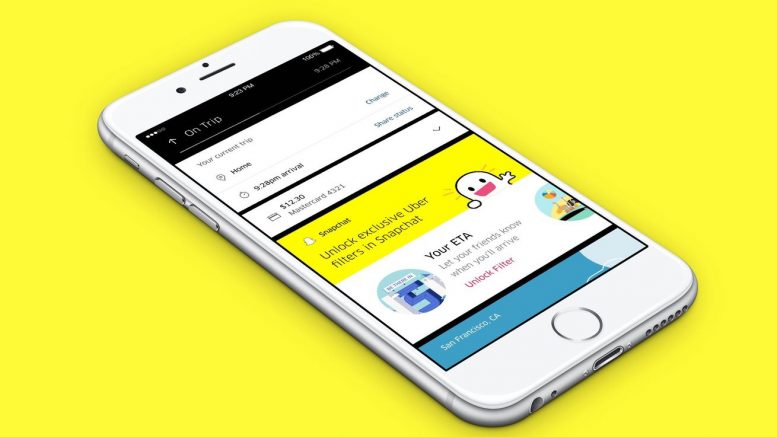 Right from the ride-sharing concepts to the approach on autonomous cars Uber tries something or the other to attract its audiences. They often make customization of their application in order to make it easy and efficient for its user to use. Be it small or big there will always be a continual update on the application. They always keep track of what updates they make and how much the people and users are satisfied with it. They also have an eye on the application which has a number of users and tries to integrate similar ideas to add pleasure to its users. One such idea is the Snapchat filters.

Uber found people getting nuts behind Snapchat. They just analyzed the application and what makes people go crazy about it. Then, later on, they planned to integrate the ideas of the application into their application on their next update. The last update to the Uber ridesharing application was featured with a clean interface and the application was enhanced by featuring with service requisition with less of chaos. Now the application had assured its user with another stunning and exciting enhancement. One is Snapchat filters and the counterpart is friend’s locator.  Let’s review in depth about the two new enthralling features of this application.

Firstly we’ll start off with Snapchat filters which are where we have lots of fun with. This enhancement was primarily done just as the fun factor. It’s just because people go gaga behind Snapchat for filters. The first question which arises within us is how a car-hailing application can use a Snapchat filter? Well, how is it going to be useful over here? As in what way the application is going to integrate the filters? The idea of this enhancement is these filters are made available only when the user is inside an Uber vehicle. The application has basically planned to add fun factors with a slight modification with the central theme the original application had. The user can unlock the filters he uses and here there is an option called ETA filter which allows your friend whom you going to travel with to know the Estimated Arrival Time of yours. There is another filter called mystery filter which is an exclusive filter on Uber application. The user can use these Snapchat filters when they’re on the ride and if the ride is gotta be shared by another person whom you know and then they can also view the images and other details if the account is not in privacy.

A newer idea of promotion

The take on Snapchat filters is that the Uber commuter will let his other Snapchat friends know that he is using Uber. It’s a new kind of promoting the application with the help of the newest wrinkle which is trending rapidly of current times. So by using the Snapchat filters the Uber’s logo gets in far reach to a huge number of masses. This is a new technique to attract number of customers to their list.

Direction to use filters in the Uber app

If the user is already an existing user at Snapchat and a habitual over hailing an Uber cab then the user will have a Snap card in their feed. Else the user can reach the feed by swiping upwards and there will be a cue where the user can unlock all filters available for a given particular duration. The user can choose one among the filters, then take a selfie and after which swipe right. The selfies can be taken with another Snap lens also.

Tell the driver an individual as location rather than place

Another feature which is been enhanced in Uber app is friend locator. This is quiet a creepy one because this feature doesn’t have an exact estimate how far it’s going to reach. Though, the feature is raising a lot of curiosity. Uber has a motto to cut down the time for its user on using this application, even a feature which would enable its user to cut short the procedure saving millisecond would matter for the designer. So now coming to the description of this new feature, it is a peculiar one where any application would have tried before. The user doesn’t have to specify the location of their destination, as in the destination that they are going to mention is not mandatory to be placed as an area of location instead it can be a name of a person. Making it clear and precise, the application is customized in such a way that the user can point out to a friend’s contact on his phone and mark it as the destination point and the driver will drop you to the location without any confusions.

Issues with the friend locator feature

This is primarily an issue from the customer perception like they have trust issues over the application. As we know that the application requires the location to be shared by its user in order to use the friend locator feature. Largely people are not ready to share their private details aboveboard. And especially to those who don’t use the Uber application and the ones who are new to hail the ride-sharing application would find it weird as they receive text messages from the application instead of push notifications. And of course the newbie’s would decline the approach and the feature is completely useless to its users.

But Uber still has explanations for this. The company explains that the personal details the users or passenger who shares are highly confidential and they assure that they will never be misused. They also say that there are no reasons to panic, for they are absolutely reliable and trustworthy. They even say that the application can no longer track the location of our friend’s destination after thirty minutes of the ride since the original static location expires.

Uber application is a box of new approaches and attempts. They always want to gratify their users and increase the customer’s satisfaction. The newly enhanced Snapchat filter and friend locator is also one among the good attempts. This must be embraced by its habitués and motivate them continually.

Smith Felix is a senior copywriter in Zoplay, a leading digital marketing company located at Chennai. I love to write on a variety of topics including PHP scripts, the mobile app development and SEO. Cabily script is a clone of Uber, which developed by the tech gigs of my company.

Impressive Ways to Elevate the User Signups for Mobile Apps

The Development of Technology in Health; the Life and the Future

How to Select a Live Streaming Dedicated Server From Serverwala

Will Window Tint Stick to Plexiglass?

The most-watched anime on Crunchyroll by region

Azure or AWS: The History, Present and Future

Is Your Business Lacking Technology?

How to Root Samsung Galaxy A51 Smartphone

The Need of Quantitative tests in Recruitment

7 Crucial Factors That Will Boost Your Business Website’s Ranking

A Beginner Guide for Bulletproof Helmet

Mortgages and divorce; everything you need to know

The How-To Guide For Buying And Selling Cars Online